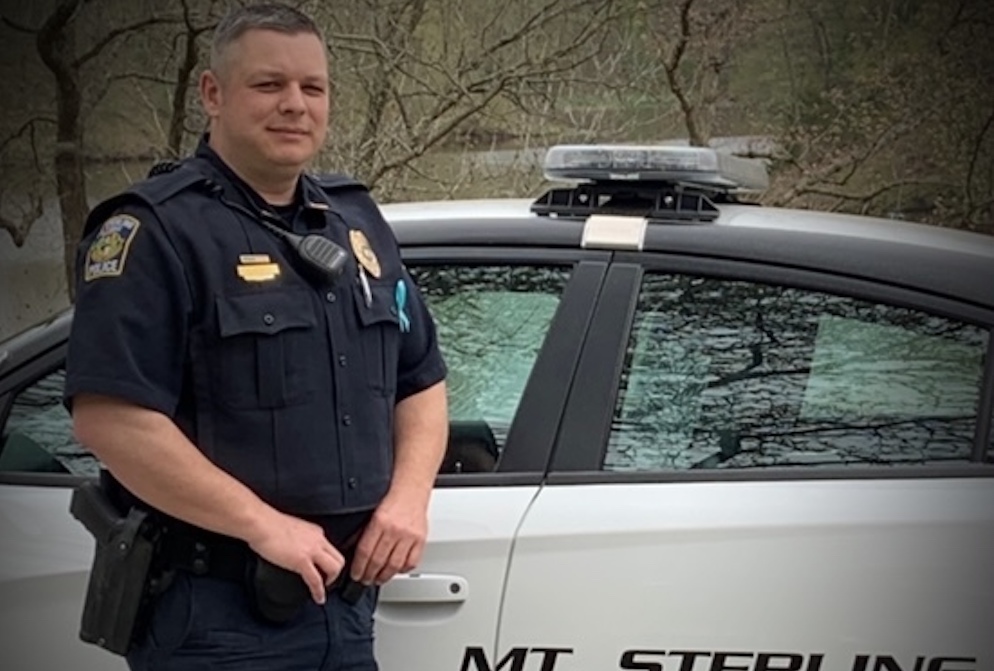 Mount Sterling Police Chief Brandon Norris made the decision to enter law enforcement almost 20 years ago after a ride along with his father, a police officer, who was tasked with doing a death notification.

“[My father] explained to me what he had to do and told me to stay in the car when we arrived,” Norris told West Central Reporter. “I watched through the window as he treated the family with the utmost compassion. He made the notification and then waited until other family could arrive to support them in their time of need. That scene has stuck with me ever since.”

Norris began his law enforcement career in 2000 as a correctional officer and reserve deputy in McDonough County. He became a full-time patrolman in 2003 in Warsaw and was appointed Warsaw Police Chief in 2005. He was hired as police chief by the City of Mount Sterling in 2014.

“I have enjoyed working for the Mount Sterling Police Department and in law enforcement in general,” Norris said. “Seeing the positive influence that you can make within the community is the most satisfying part of the career. Throughout my career I have had opportunity to watch some of these positive influences evolve.”

One of these positive influences involved a young man that had troubles at home.

“We were called several times for altercations between the son and his mother,” Norris said. “The issue seemed to continue escalating with each call. We reached out to local resources for assistance and learned about the Lincoln’s Challenge Academy. I was able to assist the family in the process and became a mentor for the program and this young man. He attended the academy which helped him get on track. He completed HS and joined the military, serving overseas.”

Norris’ goal for the Mount Sterling Police Department is to increase positive interaction with the community. The department has implemented several programs to accomplish this such as Kids and Candy which began as an opportunity for officers to take children trick or treating that might not have been able to go otherwise due to their parents having to work or not being physically able to take them.

“We would begin with a cookout at the police department with the officers and children,” Norris said. “After the cookout we would load up on the buses donated by our local mass transit. We would travel around town trick or treating before returning to the police department. Unfortunately due to funding from the state, mass transit hasn’t been able to provide the assistance as they have in the past. We now do the cookout and pass out candy preceeding and during the trick or treat hours.”

Additional department programs include Shop with a Cop, which provides clothes, toys and other necessities to struggling families, and Police Explorers, which gives area youth the opportunity to gain valuable experience and insight into emergency services.

“I enjoy helping other community programs as well as the ones that we have started through the police department,” Norris said. “I am a board member for the Quail Forever/Brown County Youth Outdoors chapter. I also own a business refinishing and customizing firearms which has afforded me the opportunity to donate goods and services to local raffles and charities to raise money for programs in our community.”

Norris was born and raised in McDonough County and is a Bushnell Prairie-City High School graduate. He currently lives in Brown County. Norris likes hunting, shooting and spending time outdoors.

Want to get notified whenever we write about City of Mt Sterling Police Department ?

Sign-up Next time we write about City of Mt Sterling Police Department, we'll email you a link to the story. You may edit your settings or unsubscribe at any time.