Illinois state Rep. Randy Frese (R-Paloma) has jumped on the Madigan-must-go bandwagon, joining a group of three other GOP lawmakers who are demanding the immediate resignation of House Speaker Mike Madigan (D-Chicago) amid a wave of FBI probes and harassment cases in which his name keeps appearing.

“Under decades of Speaker Madigan’s complete control, Illinois’ culture of corruption has thrived and grown,” Frese recently said in a press release. “How many of his cronies’ offices have to be raided, how many indictments have to be handed down before we all demand action? If the Speaker truly cares about the future of this state, he needs to do the right thing and step down immediately.”

Joined at the press conference by Reps. Mark Batinick (R-Plainfield), Tom Morrison (R-Palatine) and Margo McDermed (R-Mokena), Frese charged that Madigan and other Democratic leaders have refused to even consider serious ethics-reform measures during the recently concluded legislative session. The group has since called on Gov. J.B. Pritzker to convene a special session to deal with the issue. 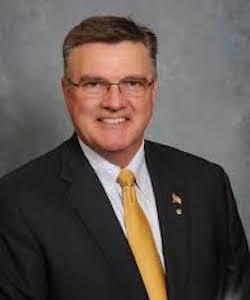 Over the last month, at least two veteran Democratic state lawmakers were forced to step down from office after being implicated in separate corruption probes. In one instance, former state Rep. Luis Arroyo (D-Chicago) was taken into federal custody after being accused of offering a $2,500 monthly bribe to a sitting state senator in exchange for a favorable vote on a gambling bill.

More recently, former state Sen. Martin Sandoval (D-Chicago), who also once served as chairman of the Senate Transportation Committee before being forced to relinquish the post, announced his resignation effective Jan. 1 after being implicated in a shakedown scheme.

Want to get notified whenever we write about Illinois Representative Randy E. Frese (R-94th) ?

Sign-up Next time we write about Illinois Representative Randy E. Frese (R-94th), we'll email you a link to the story. You may edit your settings or unsubscribe at any time.